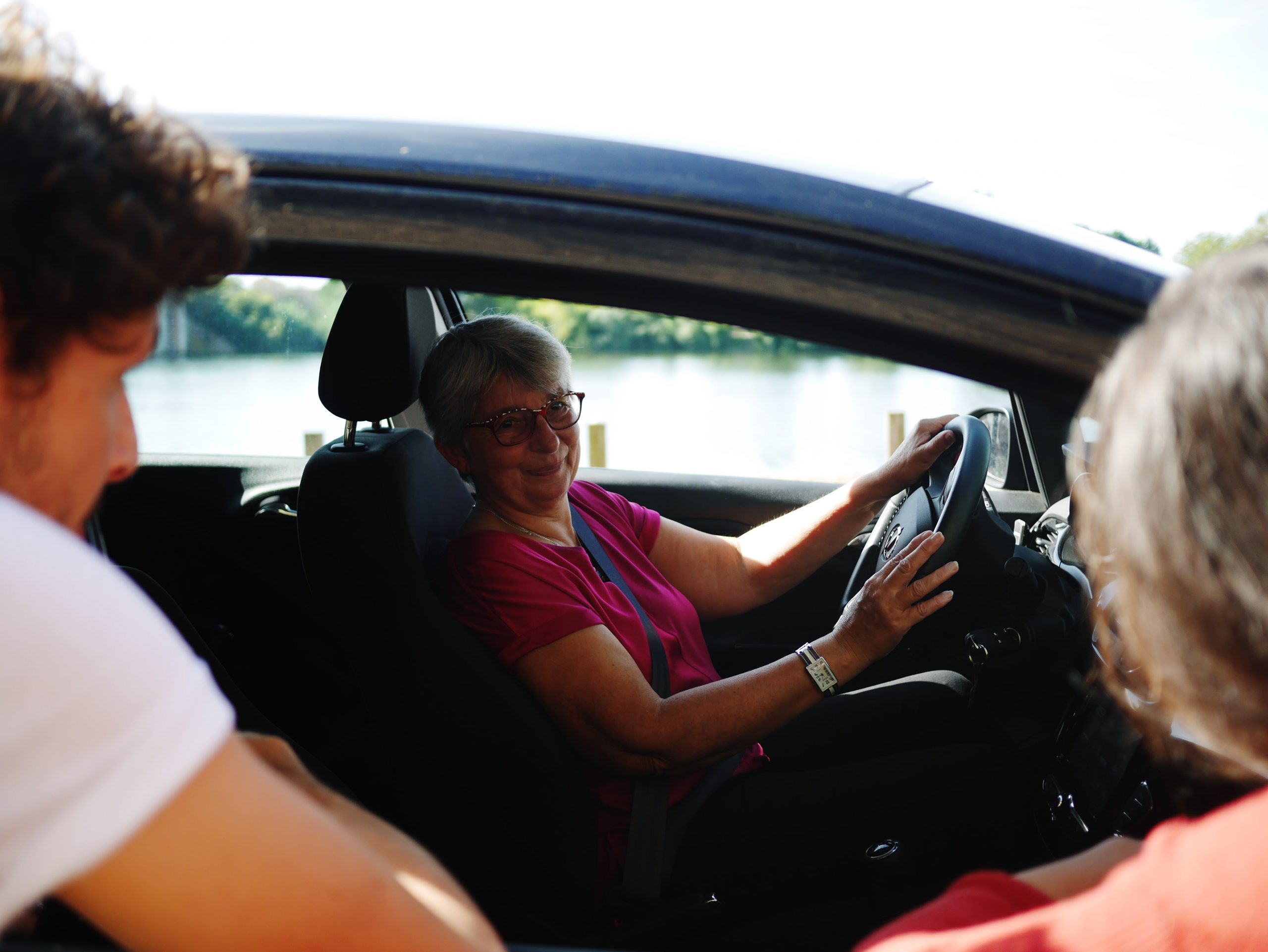 The detailed services of REZOPOUCE company for local dissemination:
In addition to the communication tools ordered from Rézopouce (flyer, posters, T-shirts, etc.) which were used in particular during the two launch challenges, the Park produced and published a flyer presenting organized hitchhiking and carpooling. , explaining the difference between the two services: Rézopouce and Mov'Ici. This flyer was printed in 5,000 copies and widely distributed in the headquarters of communities of municipalities, town halls, tourist offices and during the events listed below. The traders were also canvassed to take flyers intended for their customers and to affix on their door a badge "Here we support Rézopouce". Other events during which the Park communicated on mobility, organized hitchhiking and Rézopouce in 2019
The Rézopouce site contains pages dedicated to the territory of the Parc du Vercors. Interactive mapping allows precise visualization of all stopping points. Each municipality has a dedicated page with a map and a mobility sheet containing additional mobility information to organized hitchhiking (public transport, cycling, carpooling, etc.). In their personal space, Rézopouce registrants have access to the edition of destination sheets, useful when you are on the side of the road to indicate your destination.
A smartphone and iPhone application is also available to Rézopouce registrants; it allows passengers and drivers to be put in touch in real time and up to 24 hours in advance.

At the end of 2019, the Rézopouce Vercors network had 140 registered. The rate of registration is increasing: 33 members in 2018, 107 registered in 2019, and 23 new registered in January-February 2020. The use of the service is difficult to estimate because the follow-up of the users is not possible. On the other hand, the light panels generate data feedback which makes it possible to monitor their use. After commissioning in September 2019, the results from October to December 2019 show still moderate use but growing, with an average of 2 uses per day. The most used terminal in Villard-de-Lans has an average of 5 uses per day. We also know that changing mobility practices takes time and it is planned in 2020 to focus on communication and support for change to make this system more visible. This is why it is important to make the development of organized hitchhiking long lasting. 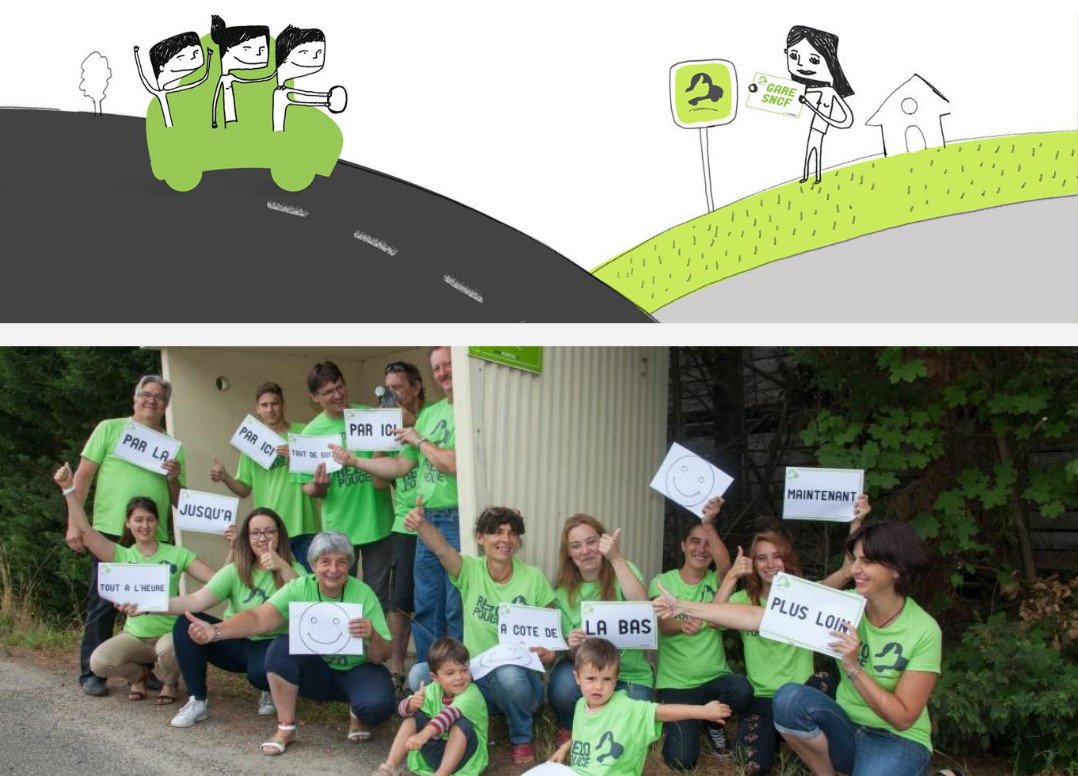 Facilitators: Analyze in advance with the road services of the Department the possibilities of location for stop points and the installation of signage subject to road regulations.

Starting Point : The practice of hitchhiking was pre-existing in the territory. A device to encourage and facilitate it had even been imagined and implemented by the social center La Paz sur le Royans with the collective "Bouge Tranquille" between 2010 and 2013. In the North Vercors, the practice was well established, especially among the high school students. The idea of ​​the project was therefore to facilitate this practice, to secure it and to encourage it to create new users and to build a network. Methodology : As part of ERDF and FNADT funding, the Park has entered into a contract with Rézo-Pouce NGO to support the deployment of a local hitchhiking system and dedicated web plateform. The Rézo-Pouce company (a social company) offers support for the deployment, as well as turnkey tools to be adapted locally (website, registration procedure, etc.) and communication tools (signage, flyers, posters, etc.). Regular relations with Rézo-Pouce have enabled the identification of hitchhiking stops, ending with a mapping on the Rézo-Pouce website. Communication tools (flyers, posters, etc.) have been ordered and distributed, in particular at various events. Signage orders were placed by the Intermunicipalities, as close as possible to the existing mobility facilities and stops. The signage was put up by the municipalities themselves or by the technical services of the Intermunicipality in some cases. The installation took place between spring and autumn 2019. In total, around fifty stop points were fitted with panels. In order to reinforce this system on very busy directions, and mainly in relation to the Grenoble metropolis area, the Park and the Metropolis have set up interactive panels. This operation was carried out as part of an order group between the Park and the Metropolis in order to select a common service provider. The ECOV company was chosen. The illuminated roadside panel displays the passenger's destination, which is positioned at the foot of the panel when waiting for a vehicle, thus facilitating the passenger-driver relationship. The Park has had four panels installed in four municipalities and a fifth is being planned for Lans-en-Vercors. These panels are integrated into the Rézopouce network of stops even if the technology differs. The panels were inaugurated on September 2020 by the Presidents of the Metropolis and of the Parc du Vercorspartement of Drôme and Isère. Chronology: In order to communicate and raise awareness of the practice of hitchhiking, communication tools and activities have been put in place by the Park throughout 2019. The recruitment of a coordinator in 2019 made it possible to increase the number of promotion actions. The launch of the device was organized in May and June 2019 in coordination with the two communities of municipalities of the Massif du Vercors and Royans-Vercors. A challenge was imagined and proposed to the inhabitants: for the voluntary participants, it was a question of making a maximum of trips by hitchhiking between 7:30 am and 9:00 am in all directions on the territory of the community of communes. To mobilize for the event, two "Apero-Inch" meetings were organized, A specific communication has been launched (Facebook, radio, Parc newsletter ...) to invite residents and employees of private and public structures in Vercors to participate in the event. On May 14, 15 and 16, 2019 between 7:00 a.m. and 9:00 a.m., around ten people, equipped with green vests ordered for the occasion, played the game by multiplying the trips by hitchhiking on the Vercors Park. In barely two hours some participants made more than 10 trips and the average waiting time was 3min and 30sec. The objective was to demonstrate that hitchhiking worked in the Vercors, the objective was reached! The event was repeated in the Royans-Vercors Intermunicipality with a little less success, but it also showed that the service worked. The mobility challenge of the AURA Region organized on June 2020 also made it possible to promote hitchhiking and carpooling among park employees. A radio program on mobility in the Park was recorded by Radio-Royans and broadcast in September 2019, available at this link: https://radioroyans.fr/a-propos-du-parc-du-vercors/les-nouvelles-du-parc/1156-rezopouce-et-mov-ici.html The Park has published regularly in its communication media (newsletter, magazine, facebook). Standard texts and illustrations have been sent to the municipalities and communities of municipalities for inclusion in their newspaper or on their website.

Current issues: Animation and communication are essential to facilitate the appropriation and the involvement of local population, and to impulse the first step towards behavior change. Behavior change takes time a lot of time, it is not after two years that we can judge success.

Economic model and human resources: Around 10,000 euros for the service provided by Rézopouce and 8,000 euros for signage, around 5,000 euros for communication expenses Time spent: 1/4 time as project manager over 2 years, plus the time of the communities of municipalities